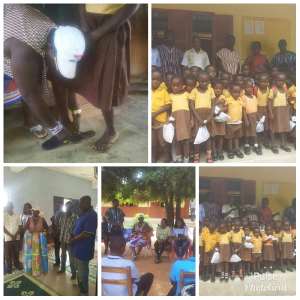 As part of her ‘One Child One Sandals’ Project, the Bono Regional Women’s Organiser of the ruling New Patriotic Party Mrs Dorothy Ama Amponsah on Tuesday, May 28, 2019, donated school scandals to Pupils in Atuahenekrom and Antwikrom in the Sunyani Municipality of the Bono region.

The project which was launched earlier this year by Mrs Ama Amponsah has benefited many schools in Techiman North, Techiman South, Kintampo North and Kintampo South all in the Bono East Region.

The donation at Atuahene and Antwikrom both in the Sunyani East Constituency marks the beginning of her ‘One Child One’ Sandals project in the Bono Region while the remaining ten constituencies in the region is expected to receive their share in the coming days.

The pupils who were highly delighted after receiving the sandals thanked the Women’s Organizer and promised to wear the sandals with proper care to last long.

Mrs Dorothy Ama Amponsah also had a meeting with women’s group in Atuahenekrom where she donated treated insecticide nets and mosquito coils to the women and encourage them to remain committed to the ruling NPP.

She and her team finally met a cross-section of Muslim Ummar in the two communities, where she asked them to pray for the President and the nation as a whole.

Mrs. Dorothy Ama Amponsah reminded parents to make the education of their children a topmost priority.