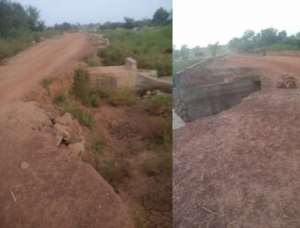 The Bongo-Balungu road in the Bongo District of the Upper East Region is in a deplorable state and posing risks to road users especially drivers and motorbike riders.

The road, which is one of the routes linking the District Capital, Bongo, and neighbouring Burkina Faso has been left to deteriorate and causing accidents to road users every day.

The bad nature of the road particularly the only bridge which links the Balungu community and Bongo is severely damaged as erosion has eaten the edges of the bridge into the middle of the road making it a death trap to its users.

The condition of the bridge is expected to get worse when the rains set in from April.

The eroded nature of the Bongo-Balungu Bridge cannot permit two vehicles to use it at the same time.

The road also links several communities in the district and serves as the main road of the people whenever they want to access health care at the district hospital and engage in economic activities.

A visit by the Ghana News Agency (GNA) revealed that new users of the road were in great danger of losing their lives as result of getting involved possible accidents.

Mr Gabriel Asampanpika, a member of the Balungu community and student of the University of Education, lamented how successive governments failed to address the concerns of the people, even after the people demonstrated to express their grievances on the need to rehabilitate the bridge and the road.

He said the Bongo District lost huge revenue as it was the only route connecting the district capital to Ghana-Burkina Faso because the situation had compelled road users to abandon the road to use other routes without passing through the district.

Mr Asampanpika called for collective efforts from leaders of the community, especially the leaders to eschew politics and help to develop the area and urged government to treat the road issue particularly the bridge with seriousness and have it fixed to make it motorable.

Mr Dominic Ayamdoo, Assemblyman for the Balungu Electoral Area who lamented the severity of the situation indicated that the bridge had caused fatalities while trucks carrying farm produce such as tomatoes from Burkina Faso most often capsized and the produce got drowned.

In an interview with Mr Peter Ayamga Ayinbisa the Bongo District Chief Executive (DCE), the bad nature of the road particularly the bridge, had compelled vehicles to prefer other routes such as the Paga road through Bolgatanga, at the expense of the district leading to huge losses of revenue.

The DCE explained that the situation was worrying and said efforts were being made to facelift the road including; the bridge and other roads in the district such as Namoo-Zorko and Vea roads as well as the Yorogo Eye Clinic to Bongo-Bogrego, adding that the roads had been advertised and the contracts would soon be awarded.

He underscored the importance of rehabilitated roads to the economic prospects of the district, adding that it would boost the implementation of the government flagship programmes such as the One-District One-Factory where the Assembly had proposed Clay and Rock Factories for construction.