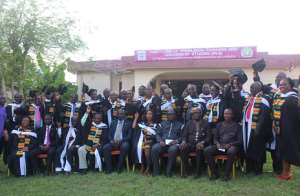 President-elect of the Ghana National Association of ADR Practitioners (GNAAP), Daniel Owusu Koranteng, has called on colleague practitioners to exhibit the highest level of professionalism in the discharge of duties.

He said it was through professionalism on the part of ADR practitioners that Ghana could become a hub for ADR practice in the country.

“We know that from today we cannot do anything anyhow; we are supposed to act as professionals and that is what we expect of you,” he said during the 5th graduation ceremony of ADR practitioners of the Institute of Paralegal Training and Leadership Studies (IPLS).

The graduands, totalling 28, were awarded certificates after 15 weeks of intense training in negotiation, mediation and arbitration, and international best practices on ADR.

Mr. Koranteng noted that already Ghana is on the right path of building a strong foundation for ADR practice, adding that with the creation of a few more ADR centres of excellence, the country would soon become an ADR hub in Africa.

“Ghana has all that it takes to be a major ADR hub in Africa … what is left is to have a core of well trained cadres of professionals who are working in various fields to ensure that this vision becomes a reality,” he said.

He again charged the graduands to join GNAAP to help push further the vision of the association.

In his remarks, the Executive Director of IPLS, Benjamin Arthur, congratulated the students on their achievement and urged them to make good use of the knowledge and skills they had acquired at their various places of work.

“Each one of you has worked so hard to get here. However, you’ll be making a big mistake if you believe that it ends here. Now that you have graduated, the onus is on you to package the knowledge and skills you have acquired and that will tell the type of impact you’ll be able to make out there,” he added.

National ADR Coordinator Ernest Nartey said although the practice of ADR in Ghana is a virgin enterprise, with continued training of professional ADR practitioners, the country would be well poised in deepening its peace and stability through effective conflict resolution.

Current President, GNAAP, Sarfo Mensah, urged the graduands to make their presence felt wherever they would go and resolve conflicts no matter the intensity of the situation.

“We have a key role to play in terms of advocacy to make sure that ADR practice penetrates the public and our society,” he said.