Editor in Chief of the Crusading Guide newspaper has described as “rubbish” a tape recording in which ace investigative journalist Anas Aremeyaw Anas is heard extorting money from one of the subjects of his investigation.

Malik Kweku Baako Jnr told Myjoyonline.com’s Editor Malik Abass Daabu the content of the recording must be binned because it provides no evidence of extortion except the rehash of old unsubstantiated allegations.

The controversial recording was part of the leaked pictures, videos and sounds put in the public domain by the outraged law maker Kennedy Agyepong.

The Assin Central MP has within the past few days been waging a campaign against the ace investigative journalist Anas Aremeyaw Anas who has promised to air the latest investigative piece he did on Ghana Football.

Even before the content of the investigative piece will be aired on June 6, 2018, excerpts of it have already caused a stir leading to the arrest and interrogation of the Football Association boss Kwesi Nyantekyi.

He is also heard mentioning the name of Egbert Faibille, a lawyer as being on standby to transfer an amount of money to the business man.

While the content of the audio has been described as diversionary, others believe its content must not be disregarded.

In a reaction to the audio, Egbert Faibille in a Facebook post said the content of that audio is the details of the $5.7 million gold scam case involving businessman Hafiz Mohammed in which the latter was later arrested and prosecuted. 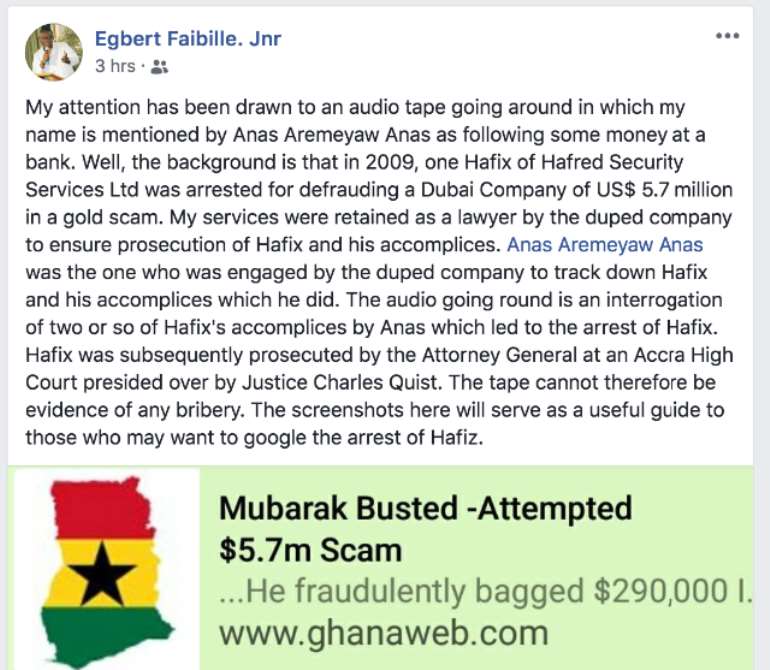 According to him, the business man had defrauded Hafred Security Services, the Dubai company, he [Egbert] was working for, and Anas had been employed by the company to track and arrest the suspect.

As a result of the investigation, Hafiz was arrested and prosecuted.

“The tape cannot, therefore, be evidence of any bribery,” he said and posted a screenshot of the gold scam story in which Hafiz was arrested and prosecuted.