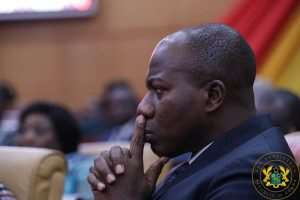 The Bawku Central Member of Parliament, Mahama Ayariga intends to go to the Supreme Court to seek an interpretation of the constitution of the privileges of MPs.

He says he wants the court to determine whether he is obliged to honour a court invitation on a day of parliamentary sitting.

Speaking on Eyewitness News on Tuesday, Ayariga said he has no challenge with honouring invitations to court to stand trial in the case brought against him by the Special Prosecutor, Martin Amidu but he is only available to go to court on Monday or weekends when he has no parliamentary business to attend to.

There was a slight tussle on Tuesday over whether or not Ayariga should go to court while parliament was sitting.

The judge in the case insisted that Ayariga reports to the court, the speaker of Parliament, Prof. Mike Oquaye ruled that the Bawku Central MP could only honour court invitations when he is not undertaking any parliamentary activity, in accordance with the Constitution which states that MPs must not be obstructed from discharging their parliamentary duties.

Ayariga, however, went to the court and following a hearing of the case, the matter was adjourned to a Monday.

Many had earlier interpreted Ayariga’s insistence that he will not honour court invitations on any other day apart from Mondays to mean that he was scared to stand trial.

But Ayariga says that while he is ready to defend all the allegations against him in court, he will be minded that the proceedings do not interfere with his parliamentary work hence will only be available on Mondays but will seek further interpretation of the law from the Supreme Court of the High Court at any point adjourns the case to a day other than a Monday.

“Parliament is the speaker and he has ruled. He agrees with our position. When we went to court and judge adjourned and asked for a date, we gave her Monday and she agreed with us that we should come on Monday. So long as she keeps agreeing with us that we should come on Monday, I will always go but the days that they say No, come on Tuesday when parliament is sitting, I’ll raise a constitutional objection and then we will refer the matter to the supreme court and the court will rule. If the judge wants us to sit on Saturday or Sunday I will come”