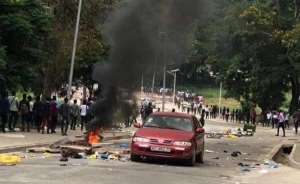 The Asanteman Council has condemned in no uncertain terms the vandalism that took place at the Kwame Nkrumah University of Science and Technology (KNUST) on Monday.

The Council has also ordered the authorities of the university to immediately settle the misunderstanding that led to the destructive demonstration.

Nana Yaw Owusu, who is the Asantehene’s ‘Mpaboa hene’ told Mugabe Maase on ‘Inside politics’ on Radio XYZ 93.1 on Tuesday that “something triggered the act”, adding that the Council expects that the managers of the university settle the matter amicably.

“Otumfuor is not happy about the violence and the Asanteman Council is worried,” he disclosed while bemoaning the vandalism.

His comments come after some angry students vandalized properties on campus while demonstrating. The vandalism stemmed from a misunderstanding between the students and the school authorities that has been lingering ever since some all-male halls were converted into mixed ones.

The demonstration was also intended to kick against the ‘tyrannical’ style of the university administration and also express concern over the use of force by the Vice-Chancellor, Prof. Kwasi Obiri-Danso, to cow the students into submission following some new directives to ban a usual singing and drumming sessions otherwise known as ‘morale’.

Condemning the rampage, Nana Yaw Owusu noted that although the Asantehene, Otumfuo Osei Tutu II, is out of the country, he is worried about the situation that has led to the closure of the School.

He further stated that though investigations have commenced into the matter, the traditional council will cooperate with the appropriate authorities to finding a lasting solution to the challenges confronting the institution and its students.

In a related development, the Ashanti Regional Security Council (REGSEC) held a crunch meeting with the Minister for Education, Dr Matthew Opoku Prempeh and Minister for Information designate, Mr Kojo Oppong Nkrumah to see how best they can solve the impasse.

According XYZ News’ Ashanti Regional Correspondent, the sector minister, did not speak to the media after the meeting.

However, he said KNUST authorities have debunked rumours that its Vice Chancellor, prof. Kwasi Obiri-Danso has resigned. The university has also promised to be in touch with the general public as events unfold.