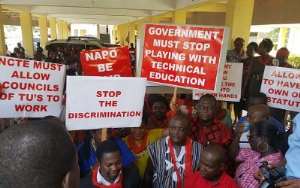 It seems the simmering disagreement between the Fair Wages and Salaries Commission (FWSC) and the leadership of Technical University Teachers Association (TUTAG) over emoluments of lecturers will boil over to affect students who are preparing for end of semester examinations if immediate steps are not taken to reach a consensus between the two parties.

According to information in a leaked document dated November 27, 2019, from TUTAG which is copied to the Presidency, the FWSC’s decision to review allowances of public university lecturers just as TUTAG members were included as beneficiaries, is in bad faith and a violation of the October 28, 2019 ruling by the National Labour Commission (NLC) which ended the 3-week industrial action by TUTAG over the same issue of emoluments.

In the document, TUTAG claims FWSC is attempting to review the existing lectures’ allowances downward by 60%, a situation they are determined to resist by embarking on another industrial action to call for its reversal.

Below is the full statement:
ATTEMPTS BY FAIR WAGES AND SALARIES COMMISSION (FWSC) TO UNDERMINE THE NATIONAL LABOUR COMMISSION (NLC) RULING OF 28 OCTOBER 2019, TO PAY SAME PUBLIC UNTVERSITY ALLOWANCES TO MEMBERS OF THE TECHNICAL UNIVERSITIES

It has come to the attention of the leadership of the Technical University Teachers Association of Ghana (TUTAG) that the FWSC is attempting to review the existing allowances of public universities downwards by about sixty percent (60%), just because TUs are now beneficiaries, a decision which may end up likely to shortchange our membership, thereby creating tension on our campuses.

This came to light from a meeting held on the 22nd November 2019 between FWSC, MoE, MoF on one hand and VCG and other related unions on the other hand.

Interestingly, the report stated that the FWsC is attempting this review in response to the TUTAG industrial action and the subsequent ruling of the NLC. This is clearly a contemptuous move and an affront to the integrity of the NLC.

We do not want to believe that this review is an attempt to shortchange our membership and an attempt to derail the directive put in place by the National Labour Commission to maintain industrial peace and harmony in the Technical Universities in Ghana.

We wish to emphasize that our understanding of the ruling does not in any way imply that the FWSC or government should go and adjust the existing allowances downwards and pay us same, rather, we understood it, and still understand it, to mean that we are of the same status like all existing public universities and as such, should enjoy same allowances which have been enjoyed by the staff of the public universities for more than six years and still continue to enjoy.

It is frustrating to note that the FWSC is even suggesting that where their proposed rates are lower than the existing rates, institutions will be asked to pay from their Income Generating Fund (IGF), a proposition which can hardly work for the Technical Universities. This is an attempt to refuse cqual pay for all public universities including technical universities, and deserves to be resisted by all law-abiding citizens and institutions.

Please note that by a copy of this letter we wish to serve notice to the government, all governing councils, and of course, the National Labour Commission that if by the end of December 2019, we are not paid the Existing (Not Downward Adjusted) publie university allowances per the implicit and fine details of the ruling delivered by the Commissioner of the National Labour Commission on Monday 28th October 2019, we should not be blamed for any industrial unrest on the various Technical University campuses.

From the above the following questions beg for answers:

2. As the allowances are adjusted downward by 60% as per the report from the meeting mentioned above, which rate(s) become the govemment’s accepted ones? Is it the adjusted rates or the existing rates?

3. If the adjusted rates are the acceptable ones, why the need to top up from 1GF?

4. If existing rates are the acceptable ones, then why the need for downward adjustment.

We feel that what is happening is a recipe for unfair labour practice. Please, be informed, accordingly and we wish you well. 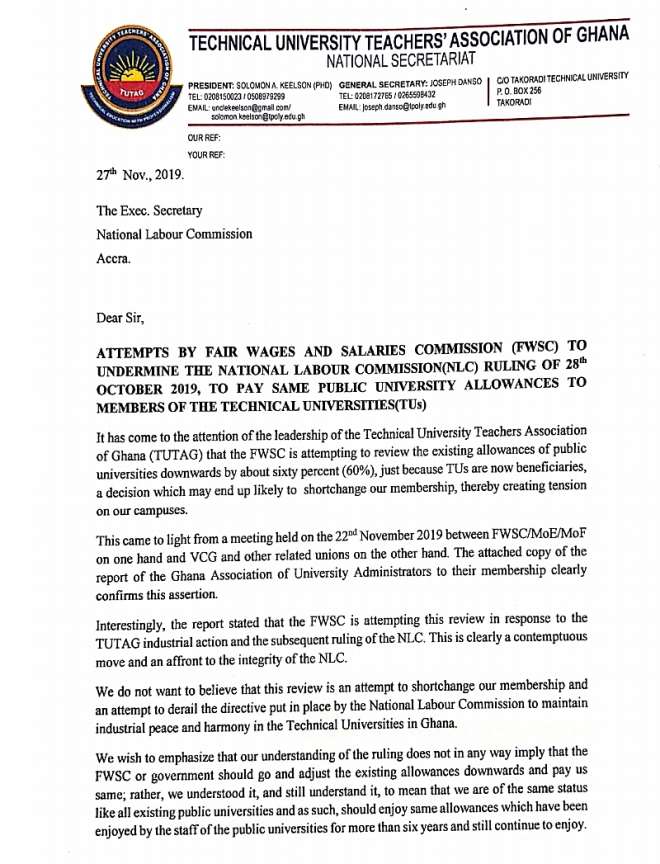 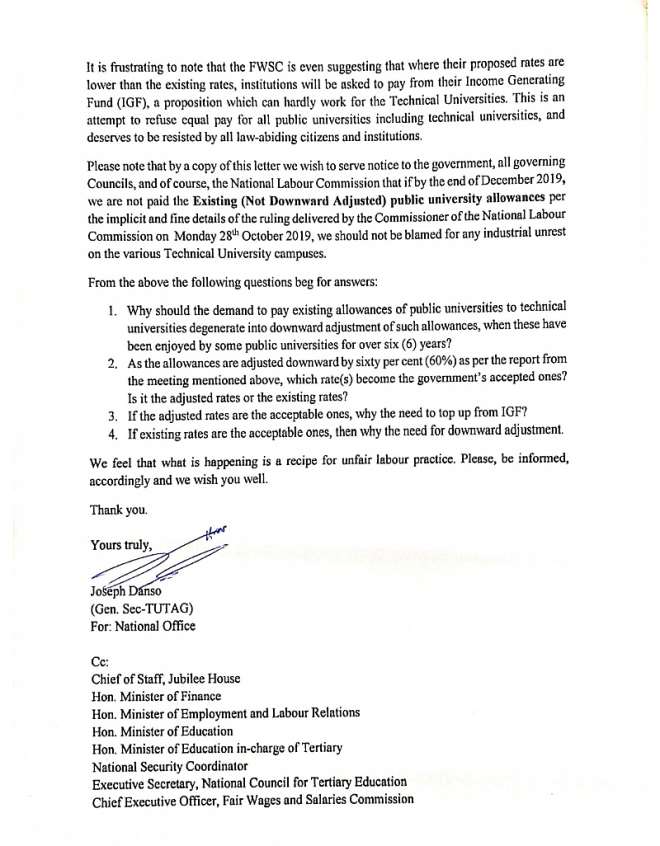