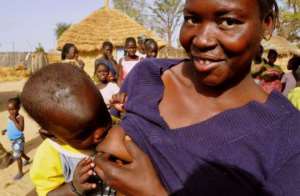 Breastfeeding is the essential element in primary health care. It is proper nutrition during infancy and early childhood. It is also beneficial to ensure the growth, health, and development of children to their full life.

It has been realized worldwide that breastfeeding is important to both the mother and child and also considered as the best source of nutrition for infants. The World Health Organization (WHO) recommends that infants should be exclusively breastfed for the first six (6) months without water or any other food.

Globally inadequate nutrition is an underlying cause of the deaths of more than 2-6 million children and over One hundred thousand mothers (100,000) mothers every year. Many health groups such as WHO, UNICEF support six (6) months of exclusive breastfeeding and continued partial breastfeeding for an extended period.

Breastfeeding can simply be defined as the normal way of providing young infants with the nutrients they need for healthy growth and development. Breastfeeding baby effectively reduces the rate of mobility, malnutrition, and mortality in infants.

Every mother can breastfeed when they have accurate information, support from family, health care system and society at large.

The first breast milk that comes from the breasts called colostrum which is yellowish in colour, sticky breast milk produced at the end of pregnancy and it is recommended by WHO (World Health Organization) as the perfect food for the newborn. W.H.O also recommends the initiation of breastfeeding within the first hour after birth. The baby is placed on the mother and feeding commences as soon as the baby shows interest.

The breastfeeding mothers usually could be explained according to its type which is discussed as follows;

There are numerous challenges that lactating mothers encounter during breastfeeding which includes:

The above challenges can be minimized by; lactating mothers alternate their breast during breastfeeding. Government agencies, NGO’s and private installations should extend maternity leave to six (6) months so that mothers can practice exclusive breastfeeding, Health professionals should educate lactating mothers on the importance of breastfeeding to mother and child, hygienic practices of the breast, position and also reward mothers who practice exclusive breastfeeding and also report any unusual symptoms of diseases of the breast.

Lactating mothers should gradually introduce child or infants to infants formula when a child is six (6) months and also encourage suckling at the same time.

There are a lot of positions that are adopted by lactating mothers during breastfeeding such as:

However, after the baby has been positioned well, it is important that baby is lactated properly. These are some tips for lactation:

After all these procedures for lactating, the mother must have unlatched in different form by pulling the breast out of the baby’s mouth abruptly can cause injury to the nipple, when having latching problems and need to relatch or the baby has finished feeding but still holding onto the breast, break the suction first by pressing the rest nearer the mouth or by inserting a clean finger to the cover of the baby’s mouth.

Breastfeeding offers benefits to both the mother and baby in different ways. For the baby, it gives protection from infection by getting a healthy dose of antibodies from the mother and also helps to boost the immunity against bugs including cold and ear infection etc. It also serves as a naturally safe meal for the always sterile without boiling. Italsobooststhebrain of the baby by increasing the IQ as compared with babies who feeds on formula. It also serves as better poops for the baby by easy digestion which prevents constipation. Breastfeeding has no allergies to the baby.

Benefits of Breastfeeding to the mother
Most lactating mother’sbenefits from breast feeding including;

Breastfeeding has been described as the best natural perfect babies’ food in which human breast milk contains at least 100 ingredients that cannot be found in any other infant formular. Hence, lactating mothers should practice proper breastfeeding techniques to ensure good health, development of children and alsoreduce infant’s mortality and mobility.

Breastmilk is readily available to the baby and very cheap. It also involves the participation and cooperation of the mother just as the goals of the Primary Health Care seeks to provide. As it prevents infection, then it plays the role of the preventive arena of the PHC.