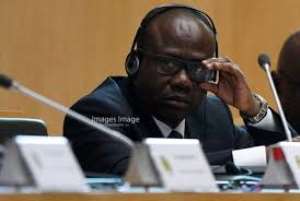 The video which was premiered two weeks ago captured Nyantakyi and also revealed rot at the GFA.

In a press statement in reaction to the investigative report by Anas and his Tiger eye PI team the former FA boss said.

“I assure all my friends and loved ones that I am determined to deal with this matter in accordance with the law as well as the most ethical and professional standards.”

In the statements Nyantakyi responded to all the allegations in a press statement, painstakingly explaining what he says is his side of the story in the matter that resulted in his suspension from the world football governing body, FIFA.

Before concluding the release, he added that, “…there was a demand on me through a third party to part with $150k [$150,000] for Anas to drop the videos on me. I didn’t have the said amount of money to meet his demand.”

Following Anas’ video, the government of Ghana has dissolved the FA and a five-member committee have been formed.