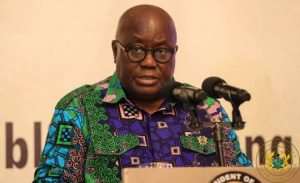 He will lead the Ghanaian delegation, including the Minister for Foreign Affairs and Regional Integration, Shirley Ayorkor Botchway, MP for Anyaa Sowutuom, and Minister for Employment and Labour Relations, Ignatius Baffuor Awuah, MP for Sunyani West, to the Conference.

He will leave Ghana on Sunday, 9th June.

The Conference, which is also commemorating the centenary celebration of the founding of the ILO, is being held under the theme “Building a future with decent work”.

President Akufo-Addo will address the opening session of the Conference, which commences on Monday, June 10, 2019, in which he will set out Ghana’s contribution to the future of the world of work.

This year’s session brings together over 5,000 delegates from around the globe to find solutions to the challenges of the future of the world of work, and celebrate the Centenary of the ILO.

The International Labour Conference is the ILO’s highest decision-making body. It meets annually, bringing together the tripartite delegations from the Organization’s 187 member States, and a number of observers from other international actors, to consider a series of topics placed on its agenda by the Governing Body of the ILO.

President Akufo-Addo will, thereafter, from 11th June to 16th June 2019, embark on working visits to five Caribbean nations as part of efforts promoting the “Year of Return”.

He will lead the Ghanaian delegation, comprising the Minister for Foreign Affairs and Regional Integration, Hon. Shirley Ayorkor Botchway, and the Minister for Tourism, Arts and Culture, Hon. Barbara Oteng Gyasi, MP for Prestea Huni Valley, on the tour.

The countries to be visited by the President are Guyana, St. Vincent and Grenadines, Trinidad and Tobago, Barbados and Jamaica.

Having proclaimed 2019, as the “Year of Return” to Ghana, the 400th anniversary of the commencement of the Trans-Atlantic Slave Trade, when the first 20 West African slaves landed in Jamestown, in the Commonwealth of Virginia.

The events of the “Year of Return” are, above all, aimed at solidifying relations with descendants of Africa, resident in the Americas and the Caribbean, who have been defined as the Sixth Region of the Africa Union.

The President will return to Ghana on Monday, 17th June 2019.