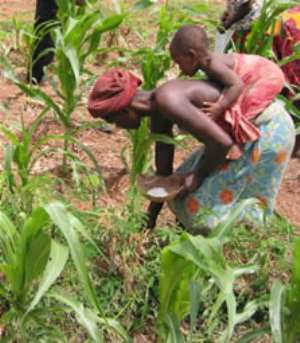 Graduates from the various Agriculture Colleges in the country have expressed their displeasure over the government’s failure to honour their part of the contract in engaging them under the Youth Employment Agency Agriculture Module.

In a press release, the graduates recounted the promises the government made to them to serve as Agriculture Extension Agents to augment the services of agriculture extension for farmers in the commencement of the Planting for Food and Jobs flagship programme.

They quizzed on the reasons why the government has failed in honouring them by recruiting them into the Ministry of Food and Agriculture and providing their basic allowances to cover their transport, protective clothing and wellington boot as officer in the dissemination of good agronomic practices to the farmers to improve and increase the productivity that would result from the flagship programme.

The graduates debunk the record from the government that it has employed 1700 graduates in February 2017 as agriculture extension agent to support the programme. They said only 570 graduates out of that number are currently in the service because of the fail promises to them.

They are also worried after good news reached them to be interviewed in November 2018 as permanent agriculture extension agents in the Ministry of Food and Agriculture only to have the bad news in February, 2019 that some graduates have been issued appointment letters. A graduate who spoke to the media with bitterness explain that even those that have been issued appointment letters are not part of the already agric extension agents under the Youth Employment Agency.

They are calling on the Minister of Food and Agriculture, Dr. Owusu Afriyie Akoto, his management and the government to remember the agreement they reached before the commencement of the Planting for Food and Jobs programme and recruited them with urgency.

The entire membership of the agric extension agents under Youth In Agric Extension module of the YEA from all the Agric colleges in the country, wishes to register and announce our displeasure to the general public and the minister of agric, the unfulfillment of the agreement and the promise given us before the commencement of the government’s flagship program PLANTING FOR FOOD AND JOBS.

Even though we the agric graduates were the first to work under the Youth Employment Agency as graduates, we accepted the offer based on the agreement between us and the Hon. minister of agric. These agreements were;

1. After the exit from the IMF program and clearance given, we would be the first to be given appointment into the service.

2. We shall be given all the benefits given to our senior officers such as provision of protective clothing, TnT, wellington boots.

1700 agric graduates have accepted to work for the nation based on the above agreements for two years, out of which only 570 were at post till date.1130 decline the offer due to unfavorable working conditions we face on daily basis. We buy our own wellington boots, commute ourselves to the field on daily basis without our TnT, non-regular and refusal of payments of our monthly stipend of ghc 350.00, which has caused some of our members to be highly indebted to their landlords and other service providers of their homes, and non-provision of our protective clothing.

Our lips were full of joy when we were called for interview in November, 2018 at the institute of local government, for the recruitment exercise, which we all honored with joy.

We are left into suspense, dismay and dilemma when in the beginning of February till date, our colleagues who openly and vehemently rejected the Planting For Food and Jobs because of the unattractiveness of the conditions of services and the meager monthly allowance involved (GHC 350.00) were now called for appointment letters, just in the name of protocols, leaving those of us who are already on the field working and having the requisite working experiences.

We see this behavior as inhuman and a complete cheat to we those who sacrificed our life, time, energy and resources for the nation and therefore calling the appropriate stakeholders and the minister of Agriculture, Hon. Dr. Owusu Afriyie Akoto as a matter of urgency remember his promises to us and come to our aid.