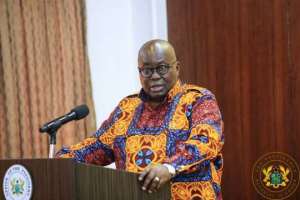 President Akufo-Addo said the construction of road has been captured in the 2019 national budget and commencement of the project is on course.

This was contained in a speech read on behalf of the President by Mrs Cynthia Morrison, Minister of Gender, Children and Social Protection at the durbar of chiefs and people of Gomoa Afransi to climax their annual Akwambo festival at Afransi.

He said all infrastructural programmes in the area which needed to be carried out by government would be catered hence the commencement of the project.

He said the government under President Akufo-Addo has kept faith with the people of Ghana since it assumed the presidency two years ago and urged the chiefs and people of Gomoa Afransi to rally behind government to succeed.

Mr Blay said the economic management team has brought the economy on track as a result of prudent management by sector official.

He assured the chiefs and people of the two traditional areas to rally behind President Akufo-Addo’s government adding that all promises made to the people of Ghana are being done.

Mr Duncan said Central Region would get its fair share of the national cake adding that the people of Central Region should ignore deceits being peddled by the opposition parties.

Prof Kwesi Yankah, Minister of State in charge of Tertiary Education, said the free SHS policy introduced by President Akufo-Addo’s government has brought relief to many parents and all should support the programme.

Ogyedom Obrenu Kwesi Atta VI, chief of Gomoa Afransi, renewed an appeal to government to speed up the construction of the Afransi-Dawurampong Ankamu road to facilitate the transport of goods and services.

He commended the government for creating various social interventions which include National Builders Corp (NABCO) and ‘Planting for Food and Jobs’ amongst others.

Mr Agyapong also presented a GHC 30, 000 cheque for the construction of a community centre and sheds at the durbar ground.