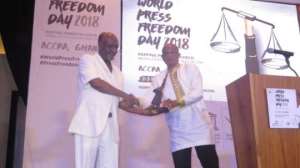 Participants at the end of the 2018 World Press Freedom Day (WPFD) Conference have unanimously adopted the Accra Declaration, with call for a greater role of the media in disseminating verifiable information to the public.

This according to the Declaration would enable journalists to monitor and hold powerful public and social actors to account and to expose illegality and other forms of wrongdoing.

It was hosted by the Ghana Government through the Information Ministry, in collaboration with the United Nations Educational, Scientific, and Cultural Organisation (UNESCO).

The Declaration called for the provision of fair payment and working conditions for media workers.

It recalled Article 19 of the Universal Declaration of Human Rights, which states: ‘Everyone has the right to freedom of opinion and expression; this includes freedom to hold opinions without interference and to seek, receive and impart information and ideas through any media and regardless of frontiers’.

Noting that the preamble to the Declaration of Principles on Freedom of Expression in Africa reaffirms the ‘fundamental importance of freedom of expression as an individual human right, as a cornerstone of democracy and as a means of ensuring respect for all human rights and freedoms’.

It recognises that freedom of expression, including media freedom, was a fundamental underpinning for the successful operation of all democratic mechanisms which keep power in check and hold it to account.

It emphasises States’ obligations to create an enabling legal and policy environment so as to foster an independent and diverse media sector and to promote respect for freedom of expression.

The Declaration calls on civil society, academia and the technical community to advocate for reform of the legal and policy framework, as needed, to bring it into line with international standards regarding freedom of expression, especially in relation to laws affecting the dissemination of information via digital communications tools.

Speaking at the closing ceremony of the WPFD Conference, Mr Getachew Engida, the Deputy Director-General, UNESCO, lauded Ghana for the successful organisation of the two-day conference.

Dr Mustapha Abdul-Hamid, the Minister of Information, presented a Ghanaian ”Gongo” Bell to Mr Engida symbolically representing a handing over of the baton of the next WPFD celebration to UNESCO to be handed over to the next host country.