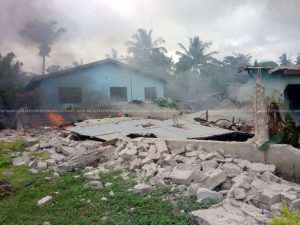 A suspect has been arrested in connection with the killing of Benjamin Assuman Acquah, a private security guard at the Abura Dunkwa branch of GCB Bank in the Central Region.

He was killed on Saturday by persons suspected to be of Malian descent, locally referred to as ‘Zamerama’.

Some angry youth of Abura Dunkwa in the Abura Asebu Kwamankese District who were infuriated over the killing of the 49-year-old Ghanaian, retaliated by burning properties belonging to the Malians.

Police in the Central Region have begun investigations into circumstances leading to the death .

According to the police, they found Benjamin “in the middle of the house, where he was taken to Hospital but died on arrival.

Rev. Edwin Kojo Sakyi, a resident of Abura Dunkwa, said the deceased, Benjamin Ato Acquah, had told his wife that he had had a confrontation with some ‘Zameramas’ in the area, who had threatened to deal with him.

Rev. Edwin Kojo Sakyi added that, at about 7:30 pm, the late Benjamin Acquah, who doubles as a linguist, entered into the compound of the ‘Zameramas’, armed with a machete and threatened to fight them.

The men, as a result, fought him back, and in the process hit him with a club resulting in his death.

They subsequently reported the incident to the Abura Dunkwa Police, he added.