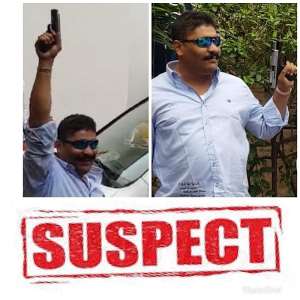 Some 20 Yemeni Gunmen have employed deadly attacks on the family of a 14-year-old girl who was allegedly defiled by Omar Mohammed Mahmudu, a 60-year-old Yemeni in December 2017.

Speaking to some editors in Accra, Lawyer Justice Abdulai, Crown Legal Bureau, Lawyers for the Zein Security and Anood Jibril Alsalami noted that the suspect and his gunmen are using death threats, character assassination and defamation to rundown businessman and good Samaritan, Hassan Zein, who is leading the fight to seek legal remedy for the family of the victim.

He indicated that the businessman, Hassan Zein, a Ghanaian-born-white succeeded in the arrest of the suspect, Omar Mohammed Mahmudu after the matter was reported to the Madina police in December last year.

According to him, the suspect was released shortly after he was arrested. He later disappeared from scene after his attempt to get the National Chief Imam, His Imminence Dr Sheik Nuhu Shaributu, to resolve the matter failed.

The lawyer said the suspect, who now lives in Spintex popped up somewhere in October, 2018 with his Yemeni gunmen and dangerous weapons without proper documentation, are allegedly engaging in broad day terror and shooting at the businessman and his family.

He added that the gunmen led by the suspect allegedly visited the offices of the businessman, Hassan Zein who decided to pick the matter up again to stay away.

Lawyer Abdulai stressed that the constant threats and daily shootings at the premises of his companies, character assassination on social media as a dubious businessman has compelled him to lay off over 2000 workers and closed down almost 50 businesses in the country to save the lives of his workers.

He alleged that even though the nefarious activities of Omar Mohammed Mahmud and his cohorts have been reported to the Police, not much appears to be done, as the suspect succeeded in using the names of the President of Ghana, the Vice President, the Malian Ambassador as well as the Minister for Interior to pave way for his unlawful activities.

The lawyer added that the suspect and his gunmen in a latest incident allegedly fired gun shots in the residence of the victim’s family on Sunday the 22nd December 2018, at around 1am (midnight).

He is calling on the President Akufo Addo, Inspector General of Police and all the security agencies to act fast to save their lives and businesses from further collapse.

Read Full Copy of the Petition to the IGP Below:

We write as lawyer for and on behalf of the Alsalami and Yousef families (our Clients) resident at West Legon, Accra, Ghana, and upon their lawful instructions.

We wish you and your hardworking staff a blessed yuletide. However, and sadly so, our Clients inform us that sometime in December 2017, their fourteen-year-old daughter was defiled by one Omar Mohammed Mahmudu (who goes by several names and nationalities depending on the particular passport, out of the several passports he holds), a Yemeni national resident somewhere at Spintex/Tema Community 18.

Following the alleged defilement of their daughter, they sought help from several persons, to ensure that the suspect is dealt with in accordance with the laws of Ghana, but sadly, all their efforts did not yield the appropriate results, until they were directed at one Hassan Zein, a Ghanaian businessman resident in West Legon, Accra. Through the hard work and efforts of Hassan Zein, the suspect was arrested by the Madina Police, but was ‘released’ shortly afterwards, and absconded from the jurisdiction, when he realized that his attempt to get the National Chief Imam, His Imminence Dr Sheik Nuhu Shaributu, to intervene and resolve the crime failed.

Our Clients instructs us that sometime in October 2018, they got information about the return of Omar Mohammed Mahmud into the country and swiftly got their lawyers to petition the Director of Criminal Investigation Department (CID), Police Headquarters, to take over the investigation and prosecution of the matter in accordance with law, since the Madina Police had not demonstrated good conduct of the matter.

Unfortunately, since Omar Mohammed Mahmud returned to the jurisdiction, he came along with thugs and dangerous ammunitions, and uses same to threaten my Clients and Hassan Zein, simply for their pivotal role in ensuring that the case against him is prosecuted. We are infonmed that, since Hassan Zein stepped into the matter to help with the arrest and possible prosecution of Omar Mohammed Mahmud, he and our Clients have been under continuous attacks on virtually daily basis, in different forms and shape.

Our Clients inform us that the nature of the threats come in several dangerous forms, but the common of it is the shooting and sometimes clocking of the guns in an obviously threatening manner directed at our Clients, and video shots taken of these threats and same sent to them. The attacks also take the form of character assassination, defamation, amongst other criminal conduct without any legal basis.

In addition to these threats of death, Omar Mohammed Mahmud and his group of cohorts have commenced a dangerous but systematic campaign to destroy the hard earned reputation of Hassan Zein, simply for the role he continues to play in ensuring that justice is seen to be exacted for the unlawful conduct of Omar. This campaign has been done mainly through social media (to wit, Facebook, Instagram, WhatsApp, YouTube, amongst others), until recently when they adopted mainstream media to propagate the defamation and character assassination of Hassan Zein.

Madam, very sadly, even though the nefarious activities of Omar Mohammed Mahmud and his cohorts have been reported the Police, depending which department or unit has jurisdiction, not much appears to be done, because, Omar Mohammed Mahmud has succeeded in using the names of the President of Ghana, the Vice President, the Malian Ambassador as well as the Minister for Interior to pave way for him and his unlawful activities. Indeed, due to the names of these persons/offices that he uses, no prosecution has taken place despite the existence of plethora of evidence to support prosecution and conviction.

Madam, unsurprisingly, in the early hours of Sunday the 22nd day of December 2018, at around lam (midnight), my clients were attacked by armed thugs who visited their residents and shot at them several times, but God being good, they escaped unhurt. This attack was orchestrated in a well-planned and organized manner, due largely to the fact that whilst some of the thugs were attacking Dawood Youssef, another group was trailing and shooting Bilal Alsalami, the elder brother of the defiled young lady, almost simultaneously. Our Clients quickly called in the Kwabenya Police, after the attackers had left.

It is the respectful prayer of our Clients that unless your good offices intervene to ensure that Omar Mohammed Mahmud and his cohorts are arrested and prosecuted for all the offences they continue to commit, and their respective backgrounds well searched, we are likely to find our country in the hands of unscrupulous persons who would do anything to endanger our national security, unless they are swiftly dealt with.

We also humbly pray that you intervene to ensure that our Clients are protected in order to allow them go about their normal activities in a civilized society. This we believe that will help them avail themselves to assist in the prosecution and trial of the suspected criminals.

Finally, we implore your good offices to intervene to help protect and safeguard, Hassan Zein, (who is mostly portrayed as a foreigner, even though he is a Ghanaian, by birth, lives in Ghana, married to a fellow Ghanaian and are well established in Ghana) and save his collapsing businesses. He has so far closed down more than Fifty of his businesses, lay off over Four Thousand workers and is in the process of liquidating most of his assets, due to the systematic attacks on his reputation and businesses.

These are our humble plea. Humbly do we count on your support and swift intervention. We wish you and through you to the entire country a Merry Christmas and a Prosperous new Year, once again.