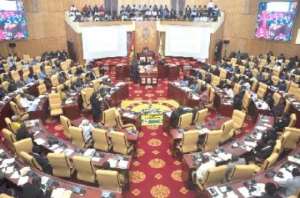 Ernesto Yeboah, leader of the Economic Fighters League (Fighters), face contempt of Parliament for obstruction of proceedings to protest the construction of a proposed 450-seat chamber for Ghana’s legislature.

Ernesto stormed the public gallery of the chambers and shuts “Drop the Chamber” when Parliament commenced Friday proceedings with Business Statement for next week sitting.

The new chamber Protestant was quickly arrested and put in handcuffs by the Police Protection Unit of Parliament with support of the Marshals Department and sent to parliament’s district police headquarters.

Ernesto who did not seek police permit before staging the protest to parliament was arrested together with two of his associate protestors.

No charges of offense was made but some members of parliament who were on the floor at the time of the incident were making reference to the Standing Orders of Parliament to possibly charge him for contempt.

Currently he is been held provisionally for disrupting the business of the house, which amount to contempt.

Majority of Ghanaians has kicked against parliamentary services board decision to proposed for the construction a new 450-chamber for Ghana’s parliament.

The yet to be confirm proposed new chamber is estimated to cost $200 million.