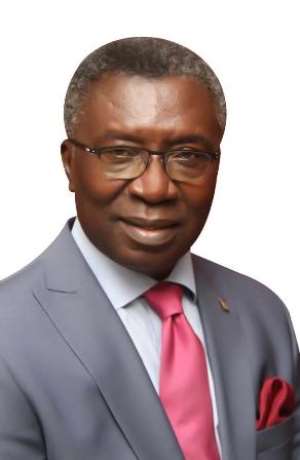 A mining expert has estimated that Ghana needs a colossal amount of $29 billion dollars to reclaim the mined out areas, which constitute 23,000 square kilometres of the land surface area, representing 10 per cent of the total land area of the nation.

Professor Kwabena Frimpong-Boateng, the Chairman of the Inter-Ministerial Committee on Illegal Mining, said this in Accra, on Friday, at the outdooring of Government’s new policy framework on mining, to regularise and reform mining activities in the country.

He said the nation was supposed to spend $12,000 to reclaim a hectare of land degraded by illegal mining, saying that the cumulative effect of illegal mining on the forest was devastating.

He noted that at the turn of the 1800 (21st Century), the country’s primary forest cover was 8.8 million hectares, and said by the late 1950s it had reduced to 4.2 million hectares.

By 1999, the Minister said only 1.5 million hectares was of the primary forest was left, while the Food and Agriculture Organisation (FAO) estimated that Ghana’s deforestation rate was 135,000 per year in 2010.

Prof. Frimpong-Boateng, also the Minister of Environment, Science, Technology and Innovation, noted that, the pollution of the water bodies and degradation of the environment by illegal miners posed serious threat to the existence of humanity, hence the measures government was putting in place to clean the mess.

‘Illegal mining operators were discharging mine tailings directly into rivers and other water bodies that served as raw source for drinking.

‘They polluted aquatic habitat, which posed serious health threat to human and animal lives,’ he pointed out.

The Minister observed that the pollution of some rivers such as Birim, Ankobra, Tano and Prah had become extremely expensive to treat as a result of mercury and other heavy metals pollution.

Prof. Frimpong-Boateng said it would require a political will to sanitise the mining industry and commended President Nana Akufo-Addo for showing strong commitment to end the canker once and for all.

He urged all Ghanaians to co-operate with the government to roll out the new mining policy framework successfully.

The Minister used the occasion to outline the various reforms to be implemented in the policy framework.

Some of the key components include: Government to provide alternative livelihoods for artisanal miners, mining equipment that are not registered and tagged with tracking devices would be confiscated to the State, fabrication and transportation of mining equipment known as ‘Changfan’ would not be allowed.

Additionally, drones and other tracking devices had been acquired to monitor and enforce mining regulations, licensed and registered artisanal small-scale miners would be organised into community co-operatives and provided with validated mining concessions to work legitimately under the supervision of district mining committees, while government ensured transparency in mining resource management in the country.

There would be formation of Geological Investigation Technical Steering Committee for the Minerals Commission and Ghana Geological Survey Authority and resourced to provide improved geology for small-scale mining operations to enable them to identify suitable lands for mining to prevent indiscriminate mining of the environment.