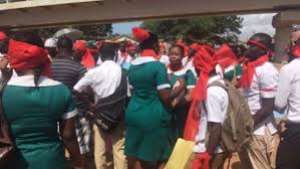 The Coalition of Unemployed Nurses (CUN) has called on the government to speed up the necessary arrangements to ensure nurses who are currently at home get their financial clearance.

A statement issued by the Coalition on Monday, on behalf of the nurses disclosed that at least 20,000 nurses who graduated in 2017 are yet to be given financial clearance.

“We are pleading on government and the Ministry of Health as a matter of urgency to release the financial clearance of these groups of nurses in order to avoid psychological trauma,” they stated.

Already, 14,254 nurses who completed their training in 2016 have received their financial clearance and have been recruited.

However, CUN has disclosed that 730 of the 2016 batch of Nurses Assistant Preventive (NAP), Nurses Assistant Clinical (NAC), 500 Registered General Nurses (RGN), and resit nurses were not captured on the financial clearance.

Whiles pleading with the government, the Coalition called on their colleagues who are still awaiting financial clearance to remain calm and resolute whiles they await official communication from the Ministry of Health.

Meanwhile, the Coalition has commended President Akufo-Addo and the Ministry of Health for the recent placement of some of its members.

“We believe the government has done a quarter of what we have been waiting for and wish they will speed up the necessary arrangement to ensure the remaining half and quarter work is completed,” they noted.

They further congratulated all 2016 year group of nurses who have so far received their financial clearances and have been posted to serve in various hospitals across the country.