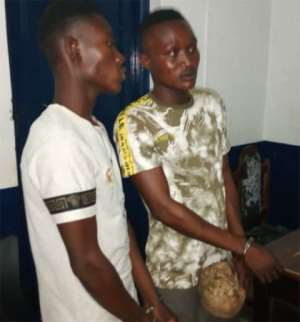 Two young men who are suspected to be involved in the trading of human parts have been nabbed by police at Offinso in the Ashanti Region.

Klinsmann Osei Amponsah, 18, and Nana Sarfo, 24, were arrested at Offinso Kokote on Wednesday afternoon by plain cloth officers whilst offering for sale, a human skull.

Chief Superintendent Ben Wonkyi of the Offinso Divisional Police Command said officers feigned interest in buying the human body part when they were alerted to it.

It is believed to have been taken from a graveyard by the young men who are suspected to be either grave looters or human body parts traders.

The police chief narrated that the officers approached the young men who were numbering three and offered to buy the skull at a drinking spot where the parties agreed to meet for the transaction.

He disclosed that Klinsmann Osei Amponsah and Nana Sarfo were arrested in the process as they brought out the human part from a bag.