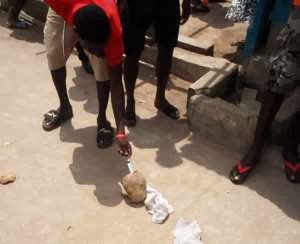 Two persons are in the grips of the police for possessing broken skulls suspected to be a human head at Sekondi in the Western region.

The suspects, 20-year-old Isaac Kweku Agyapong and Shamusu Mohammed,18, were arrested Thursday afternoon at Asamansudo a suburb of Sekondi.

Briefing Joy News, the informant disclosed that the skulls were taken from Asanda a farming community at Ellembelle.

The suspects are believed to reside at Ankobra in the Ellembelle district and Aboadze in the Shama district of the region.