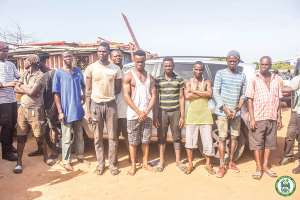 Fourteen people have been arraigned before the La Sanitation and Motor Court for indulging in open urination and defecation.

The accused were arrested during an exercise by a task force of the Accra Metropolitan Assembly (AMA) at the Jamestown and the Korle-Gonno beaches and the environs of the International Central Gospel Church (ICGC) last Tuesday.

Operations
The Head of Operations at the Public Health Department of the AMA, Mr Randolph Benjamin Morkeh, said the exercise formed part of measures to eliminate open defecation and the indiscriminate dumping of refuse in the city, and that persons caught in the act would be dealt with in accordance with the law.

He also cautioned residents and public toilet operators who discharged effluent into public drains to desist from that practice.

“We are asking all households to have toilet facilities and also register with accredited solid waste companies for their waste to be collected. If you give your waste to these junkies, we will arrest the junky and come after you too,” Mr Morkeh warned.

The Public Relations Officer of the AMA, Mr Gilbert Nii Ankrah, said the exercise would be carried out at other beaches and that the assembly had intensified its campaign on sanitation bye-laws.

Background
Open defecation at the beaches has been attributed to the absence of proper toilet facilities in coastal communities.

In a 2017 state of the world’s toilets report titled: “Out of Order”, by WaterAid, an international non-governmental organisation, Ghana was named among the top 10 countries worldwide with the highest percentage of their populations without decent toilet facilities.

Another report by the World Bank also revealed that one in five Ghanaians practised open defecation, leading to the loss of $79 million annually.