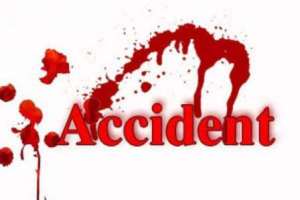 Eleven people sustained various degrees of injuries in two separate accidents on the Cape-Coast Winneba Road, near the Winneba Junction, between 04:45 and 05:50 hours Friday.

He said the Sprinter Bus, driven by one Samuel Aggrey, had eight passengers onboard from Ajumako Besease to Accra while the M/Benz Truck, which was ahead, was loaded with dry coconut from Essiama in the Western Region heading to Nigeria.

Supt Obiri said the Sprinter, on reaching a section of the road, failed to observe the signals from the Truck, and as a result, run into the rear.

He said all the passengers onboard the Sprinter Bus sustained various degrees of injuries and were rushed to the Trauma and Specialist Hospital at Winneba for treatment, while the vehicle was towed to the Winneba Police Station.

The Taxi was from Mankoadze to Winneba Junction, driven by Samuel Kaka, while the Truck was driven by Marcus Amissah from Elimina to Tema.

All the passengers in the Taxi cab sustained injuries and were also sent to the Trauma and Specialist Hospital.

Supt Obiri said the injured were responding to treatment and cautioned drivers to be cautious on the road and take road regulations seriously to prevent accidents.