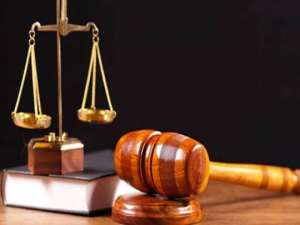 The tenth prosecution witness in the case involving Gregory Afoko, accused of murdering the former Upper East Regional Chairman of the New Patriotic Party (NPP), has testified before the trial Court.

Mr Peter Quartey Papafio, giving his evidence in chief at an Accra Circuit Court said that he resides at Madina, and has been a Forensic toxicologist and chemist with the Ghana Standards Authority, for the past 12 years.

He said his duties at the GSA are to perform post-mortem samples for the pathologist, receive and sample suspected narcotics from the security services.

He also writes analytical reports on analysis performed and also tender exhibits and reports at the law courts.

He said on the morning of May 28, 2015, he received some samples/exhibits from the CID headquarters from an investigator named Detective Chief Inspector Augustus Nkrumah.

The exhibits were sealed with a Ghana Police Service seal and he was to perform examination from the exhibits and issue out reports based on the findings.

He said after the samples were received he went ahead and gave a full description of what was submitted. There were eight separate exhibits which the analyst designated as exhibits A to H. After they were designated he opened each of them to find out what they were and then he performed the analysis to determine their content and purpose.

The witness said after the inspection and the analysis he issued out a report on the findings and returned the report back to the investigator.

The original report signed by the witness and approved by the head of department, Madam Janet B Aidoo was tendered in as evidence, without objection.

The letterhead he said was also signed by the Director of testing, Charles Amoako for the Executive Director George Crentsil now retired.

‘The report was addressed to the Superintendent in charge of the Homicide Division, with a file number 107sf5/ 2015. Eight of the assorted items for identification, date of analysis May 29, and the date of writing the report was June 1’

He said the items included one gallon, a carpet of a car seat, a pair of shoes and dress Mr Adams was purported to have been wearing, Mr Adams car seat sample, back of Mr Adams car seat, Voltic bottle in a transparent rubber containing whitish substance in it, track suit belonging to Afoko, and a plastic cap.

Mr Papafio said after receiving the exhibits he described what was written on each exhibit by the police, opened each of them to analyse what was contained in each, adding that the method used for the analysis was chemical and titrimetric.

He told the court the report on the gallon confirmed to be sulphuric acid with a concentration of 16.89 molar ie.90 to 95% pure and very corrosive and harmful when it comes in contact with the body.

Due to its corrosive nature it can cause death upon contact.

The witness said the remarks on the report stated that sulphuric acid with the above concentration was detected in the liquid substance in the gallon.

It is very corrosive and causes severe injury upon contact with the skin. All the exhibits had residues of sulphuric acid and traced to the content.

The deterioration of the pair of the shoes and clothing he added were linked to the action of the corrosive nature of concentrated sulphuric acid. The reserved sample was sealed and handed over to the case officer, he said.

‘The content of the gallon was a liquid substance with a brownish black colour.’

During cross examination the witness said the level of the content of the 4.5 litre gallon was about 5 ml, less than a quarter full.

He said the car mat handed over to him was a rubber mat, and in handling the substance he protected his hands by wearing a disposable latex gloves, adding that it had also not deteriorated but had stains on them.

Mr Osafo Boabeng asked whether he examined the Voltic bottle and he answered in the affirmative, saying it had also not suffered any corrosion, but there were stains on it.

In relation to the track suit he told the court that he examined the texture of it, it was a nylon polyester track suit, and the substance, sulphuric acid cannot damage that type of track suit, and it would only cause stains for a certain period, but after a while it would burn it.

Counsel for the accused asserted that Afoko was a motor rider, and the burns were causes as a result of contact with exhaust of the motor, but the witness responded that it was highly improbable for the exhaust to cause those burns

Answering questions on the plastic cup he said the cup was empty at the time it was handed over to him on May 28, 2015, but he can recall the date when the samples were sealed by the police.

When asked why he didn’t state his margin of errors on his report he said it was an identification test, so there is no need to identify the margins of error, and that can only be determined in the gallon, because of quantification.

The counsel ended his cross examination. The court then discharged the witness and set June 11 for prosecution to present its next witness.

At the previous sitting the ninth prosecution witness was discharged.

Afoko, a farmer, is alleged to have killed Mr Mahama on May 20, 2015, and he is being held on the charges of conspiracy to commit crime to wit murder and murder.

He has pleaded not guilty before the Court, which is also composed of a seven-member jury.

It was alleged that Afoko carried out the act with Alandgi Asabke, who is on the run.