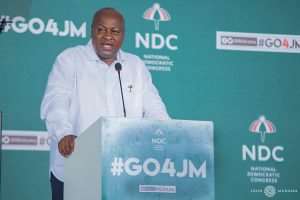 “Today, 1 Village 1 Dam has become 1 Village 1 Pond because before the [2016 general] election I asked that are you [NPP] digging dugout or dams for irrigation purposes. They refused to answer and the reality has caught up. These are dug outs. In some cases they do not even qualify as dugouts,” the former President said at the NDC’s 27th anniversary lecture.

Mr. Mahama’s claim follows concerns over the implementation of the policy which has largely been described as poor.

Residents in some communities in the north had complained that most of the dams had either dried up or were not built properly.

President Nana Akufo-Addo in response to these concerns promised to investigate the development while the Vice President asked Development Authorities not to pay contractors working on the project if they fail to meet the specified standards.

‘We’re not like NPP, we deliver on our promises’ – Mahama

John Mahama at the same programme said unlike the governing New Patriotic Party (NPP), the National Democratic Congress (NDC) always delivers on its promises when voted into power.

Giving more examples to support his claim, Mr. Mahama said the NPP gave vain promises in the run up to the 2016 general elections in a bid to win the polls.

“It was in 2016 that NPP elevated false promises to a historic level. It was just like anything the people want to hear because we want political power but you forget that when you have done that and you come into power, the reality will catch up with you …Today, a large group of people are disappointed with the NPP.”