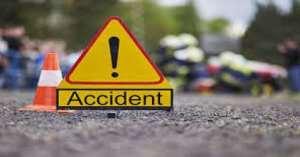 A teacher has been reported dead and over 40 students seriously injured in a fatal accident Saturday morning.

The Mangoase Senior High School students and their teacher were on an educational trip to Somanya when the accident happened.

The students have been rushed to Atua and St.Martins De Porres Hospitals in the Eastern Region for treatment.

But one of the students, said to be in critical condition, has been refereed to the Eastern Regional Hospital, Koforidua.

Accra-based Starr FM, quoting sources, reported that the bus driver was speeding while negotiating a curve on a rough road causing the bus to veer off the road and crashing after somersaulting when he attempted to apply brakes.

Meanwhile authorities at the Atua Government Hospital say nurses and doctors who are off-duty have been called in to help attend to the situation at the emergency ward.